This tiny actions plugin (just 90 KB for Lua 5.1) allows you to determine the language of the operating system your application is running on. The action return a table with the Language ID codes as used in AutoPlay Media Studio or Setup Factory.

The default action System.GetDefaultLangID() returns the primary and secondary language as adjusted in the "Current language for non-Unicode programs" setting, the system locale, found in the Control Panel, under Region and Language > Administrative: 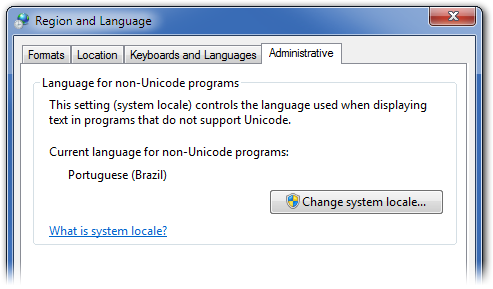 This plugin complements the former action, adding two new functions to check for the original language of Windows when it was installed (the "install language"), and the current display language, if a language pack was applied and is selected for the current user. 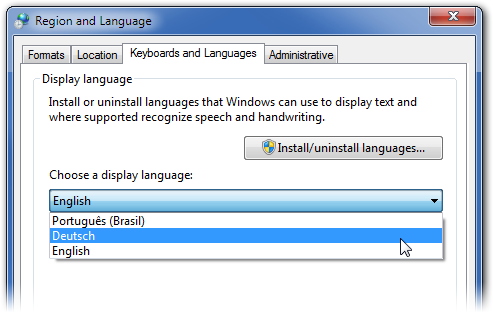 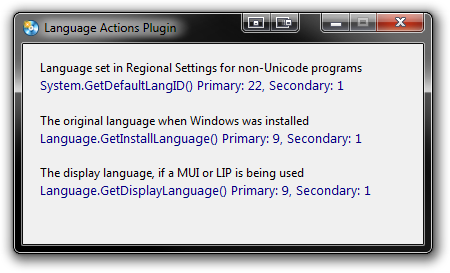 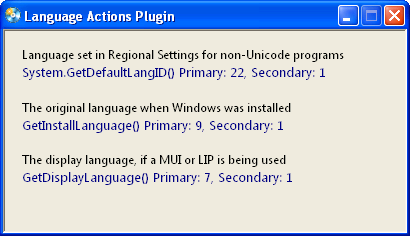 This other sample shows that the regional settings are adjusted again for Portuguese (22), the original installation language of Windows was English (9), and the language currently being used for the user interface is German (primary language id 7, secondary language 1). It is up to you to decide which of the three available language codes should be used to determine which language to use in your application.

In the past, I offered my work for free, in the hope that individuals and companies would contribute with a minimum payment. Unfortunately, that didn't happen, and the result was so meager, that I didn't even pay half the cost of hosting this site, and I had to change the policy.

All software products were tested and found to work, but they are provided without any explicit guarantee that they will work in every possible environment without further customization. If you need support or consulting, please contact me.

We use TeamViewer QuickSupport as the preferred remote assistance tool for our consulting clients.

If information or a software product you found here helped you, please be fair and show your support - even if you found the installer of my work on a different server.

Looking for other software extensions? Missing content may be restored at a later date. If in a hurry, use the contact form and make a payment to get a download link.